I lived, and finished. That's my big accomplishment for this ride. Two hundred and two point nine miles, and according to Garmin and Strava, 15,752 feet of climbing. I even got a higher "Strava Suffer Score" on this ride that I did on the Devil Mountain Double.

I knew I was riding this solo. My friend Dan had crashed this summer, and though recovering well, is  wise enough to manage his recovery intelligently (with the help of his even wiser wife, Julie) and skip this ride this year. Ron didn't feel ready and did Levi's Grand Fondo instead. So I was alone.

I started at 3:41 am – even earlier than last time — and eventually limped in 19 hours later.

What a beautiful morning. Seeing the almost-full moon reflect on lake Berryessa and play hide-and-seek behind the mountains was wonderful. I only saw a few other riders before daylight. With no one on the roads, and the perfect weather, the start was an almost zen-like experience.

Knowing I'd be riding alone, and without my trusty navigator, I was more methodical with my bike prep. I bought a small head mounted light for my helmet so I could read my route sheet and see my Garmin computer. I used velcro and a large clip to make a bullet-proof map holder, and left my map in plastic. The light worked perfectly. I even hung an extra small blinky light on the back of the strap. I realized how glad I was that I'd left the map in a plastic bag when I saw how much "personal moisture" it was covered with after the first climb.

I'd brought my iPhone thinking I'd make photos, but this ride was just too hard. I think I shot one at the first water stop, then gave up

Knowing I'd be out alone, and forever, when the sun came up I decided to listen to an audio book. I have a great Onegood™ one-ear earphone Tricia bought me. It goes in the not-traffic ear, and because I'm not listening to loud music, just talking, it doesn't remove me from the audio environment. I listened to a lot of Ken Follett's Winter of the World. It's not "Literature" but it's a darn good story.

As I feared, the sun and heat started to become a factor on Knoxville Road. I'd brought two large water bottles and a collapsable  Platypus bottle. I went through all of them by the time I hit the water stop after the tunnel. It was so hot and I was so beat I stopped a couple of time, not getting off the bike, just hanging on it, to cool down a hair.

My usual riding plan is to ride my slowish pace, but not rest long at the stops. The heat made me toss that plan out. Every stop I drank a bottle of ice water, refilled and even sat a few minutes. Fellow East Contra Costa Cyclist Jay caught a photo of me resting at the water stop on Knoxville Road. 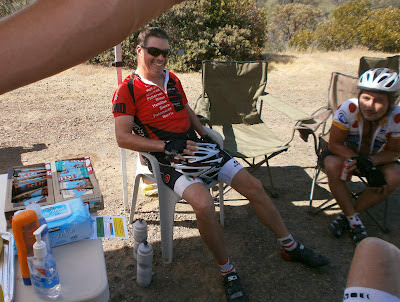 For some reason seeing others suffer makes my suffering easier to take. Maybe it's because it confirms there is actually a reason to feel crappy, and it's not just me being weak. I saw numerous riders taking a break (as I did) riding up the stupid-steep Loch Loman.

Quack Cyclists, the event organizers, realized how hot it was. They'd stationed two unplanned stops with ice and water on the short Loch Loman climb, and they were both life savers. Quacks rock. Their rides are the best supported rides I've ever been on. I don't think I'd have been able to finish without their excellent efforts.

At that point, mile 120, the ride is supposed to get easier. I guess it does a little. There's a nice long  downhill, and no serious climbing for a while. Still, it is 80 more miles and there are a few real climbs left.

I got to the second-to-last rest stop just as the sun went down and there were fortyish miles left. It started to cool off (at last!) and as I left, with my light color sunglasses, knee warmers, and base layer
back on, I could hear an owl in the woods.

The Berryessa climb that I'd been dreading — it seemed to last forever two years ago — wasn't bad, and the descent to the last rest stop was relaxing. Last time there were lots of cyclists near me, but this time, I only saw one.

The last rest stop is 12 miles from the end. Last time I thought I was almost done and was amazed how long it took. This time I settled in and just let it happen.

At the last rest stop I'd texted Tricia and left my phone on (I'd turned it off for the ride to save battery power for the end) so she could use Apple's "Find my Friends" and track me as I got closer. It didn't work as well as we'd hoped. It had me at 9 miles away even as I rolled in. Maybe it fails in roaming mode.

Tricia met me with a hug and a Sierra Nevada IPA. My friend Dan who couldn't ride surprised me by being there to congratulate me. It was a delightful way to end 202.9 miles.

This just in: Followup report
Posted by Curtis Corlew at 5:06 PM 3 comments: I was going to do a few hill repeats on Somersville Rd near Black Diamond mines. It's about two miles with a couple of ten-percent-plus sections perfect for coughing up a lung.

I'd strapped on my heart rate monitor and had done one slow warm up grunt and was descending when, at the 10% zone my front tire went boom. Suddenly I was riding on the rim, pointed downhill and doing 25 mph with a corner coming up.

I'm not sure if i didn't panic, or if I just froze. It's hard to tell the difference. The brakes weren't working much, and the ride was very sketchy. It seemed like I had a lot of time to ponder crashing. I managed to not go down, and as the road turned right I crossed the lane and headed for the dirt. I was wondering if I should lay the bike down, or just try to crash into the roadside berm.

But somehow I slowed enough to get a foot down.

Check the graphic. Downhill tire explosion, speed drop, and then my heart rate go up up up.

I unwrapped the tattered tube from the hub. I was so rattled I installed my spare tube without really checking the tire. It, of course, promptly blew up, there big a large hole in my tire.

Stuck on a no-cell-reception road in Shimano cleats I was wondering what to do when a Dow Chemical Fire Fighter with a pick up drove by, stopped, and offered me a ride back to my college.

So, I'm OK, I didn't have to walk miles in Sidi shoes and I didn't crash. My Roval wheel may be trashed. The edges are very scuffed and scrapped. I'll be trying to contact Roval and finding out if I can buy a hoop, or a discounted new wheel.

I don't know what caused my blowout. My tire was near new, I hadn't over-braked coming down, I didn't see anything, or feel like I hit anything. It's a mystery.

But mostly I'm just happy to not be bleeding.
Posted by Curtis Corlew at 10:22 AM 3 comments: 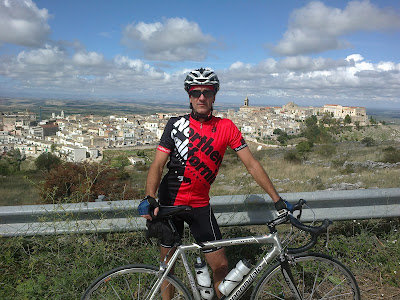 I have a couple of jerseys from Italy, so it seems only right that Italians have a jersey from Northern California. And now, thanks to Steve (AKA Midland) they do. It seems he has managed to get his brother, an Italian resident, hooked on cycling and then sent him a jersey. Why should I care? Because it's the jersey I designed, and now it's in ITALY, that's why.

When she saw this photo, Tricia immediately suggested we take our Northern California jerseys there for a ride. I like that idea. Please send all contributions to out Italian vacation to this web site.
Posted by Curtis Corlew at 9:37 PM 3 comments: I noticed that I'm not posting as much to my blog, and I've asked myself why. Perhaps it's because there aren't any readers, or maybe it's the the BikeForums community has taken a hit from Facebook, Google+ and Twitter, so I feel like my cycling circle has grown smaller. Or maybe it's inflation. 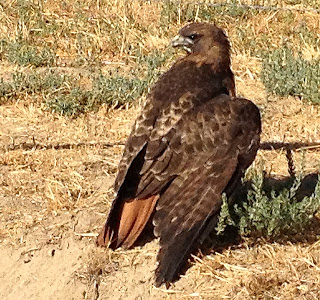 When I started any ride of 100 feet or more was blog worthy. Heck, maybe ground breaking. Now, maybe it takes something that's actually new. And there isn't a lot of new going on in my cycling world that's noteworthy. Blog inflation. It's a real problem. I guess. Or not.

Today Tricia and I had a perfectly nice 47 mile scamper around our Antioch loop and out to the recently reopened Los Vaqueros Dam road. Not much traffic, blue skies, delightful golden hills with Mt. Diablo in the background. But it's pretty much the same old ride. How many blog posts can there be about the same ride?

We did see a injured hawk. We reported it to the the ranger folks at the park. Birds of prey are rather frightening when they're close, so we didn't bother it. I sure hope it doesn't drop to the bottom part of the food pyramid. Here's hoping it gets rescued. Tricia and I were knocking out our usual don't-want-to-drive-to-ride local loop when we came across Blaze out on Empire Mine Road. I'm not sure how he talked his stoker into providing him with a great view and wind in the face without having to pedal at all, but more power to him.
Posted by Curtis Corlew at 8:18 PM No comments: What a beautiful day. Not hot, not cold, just right. Tricia and I joined Dan (Lanceoldstrong) and Rich for an out and back on Mines Road. The last time I rode it was during the Devil Mountain Double, after  100 miles and three huge climbs. I should have been a lot easier today, and it was, but not as much as I thought it might be.

I have no photos of Tricia because she was up the road before the rest of us warmed up. You'll have to make do with Rich and Dan.

I learned two iPhone things today.
That is all.

Posted by Curtis Corlew at 9:50 PM No comments: